Gradually we are beginning to finalize the reports from Moscow. We visited this stunning town in December and this was all dedicated to the tuner TopCar. We visited an exhibition, went driving in the Vantage models and did a lot more. The second day of our visit we went out with the Stingray GTR to make a report. A special Tuning Porsche Panamera with a very aggressive body kit. It’s a vehicle of which only 25 copies are made. The imposing Moscow State University and its surroundings were the place where the following report of TopCar’s Stingray GTR is made.

The name of the tuned Porsche Panamera is a reference to a ray, to be precise, the kind which is called the ‘bow mouth’. The first model is the Stingray which was introduced to the market in April 2010. Until this moment, this is the only Stingray uploaded to Autogespot so we just have to wait a little longer before we see the very brutal Stingray GTR on Autogespot. The normal Stingray was actually just a prelude for a much more brutal variant. In this model only a few parts were changed. The car has a different front bumper with lager air intakes and a carbon fiber front spoiler. We can also find a carbon hood at the front. The side of the car is characterized by carbon fiber side panels and side skirts. You can also find the TopCar logo on the side panels. The rear of the car has a big spoiler, a sport exhaust which gives the car some extra power and also some extra air intakes behind the wheels. Thanks to the changed appearance of the car, the Stingray has a lower air resistance. The TopCar Stingray is a great product, but for the real fireworks, the limited Stingray GTR is a lot more interesting. 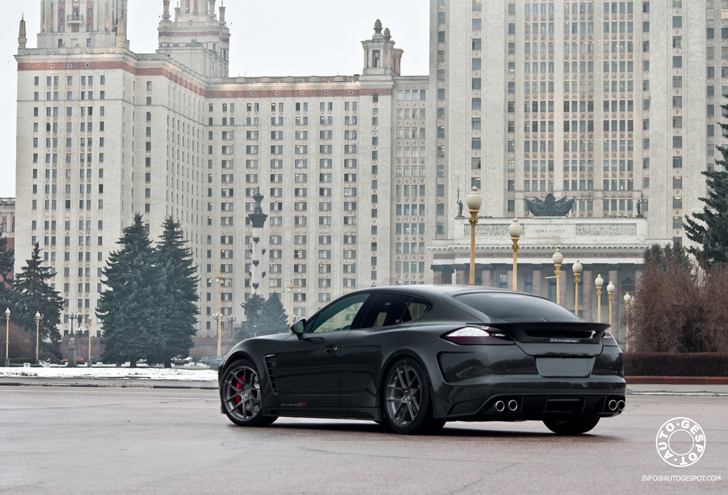 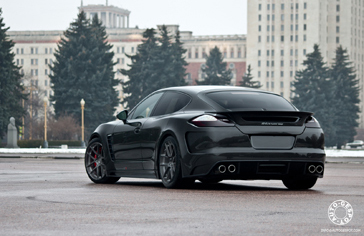 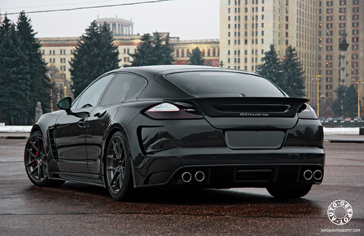 TopCar went a lot further than most tuners do in the development of the Stingray GTR. In this model, all parts of the exterior were completely re-edited while tuners like Mansory and TechArt only replace the relatively simple parts. The result is a car which is several inches wider due to the carbon fiber body kit which is added to the car. All components, the carbon fiber and Kevlar are produces by TopCar itself. The Stingray GTR has a new front and rear bumper. At the rear, the new body kit matches the lines of the car very well. This makes some nice details visible, like the sharp crease at the darkened tail lights. At the front, the new front bumper has a little LED lighting strip and the panels in the bumper are completely made out of carbon fiber. Because the rear of the car has changed very much, the wheel arches on the front of the car are more brutal compared to a standard Panamera? If you look at the front of the Stingray GTR, you see several sharp folds. The overall picture is a completely insane car in our eyes. Very aggressive, but not out of proportion due to certain elements. You could have read in the interview that TopCar doesn’t see Mansory as a competitor. The Mansory Panamera is really extreme and not really in proportion. An example is the Mansory Siracusa, this car has only one goal, drawing attention. When you are driving around in Moscow in this car, you certainly get enough attention. This doesn’t happen with a normal Panamera which flies out of the dealerships because of its popularity. 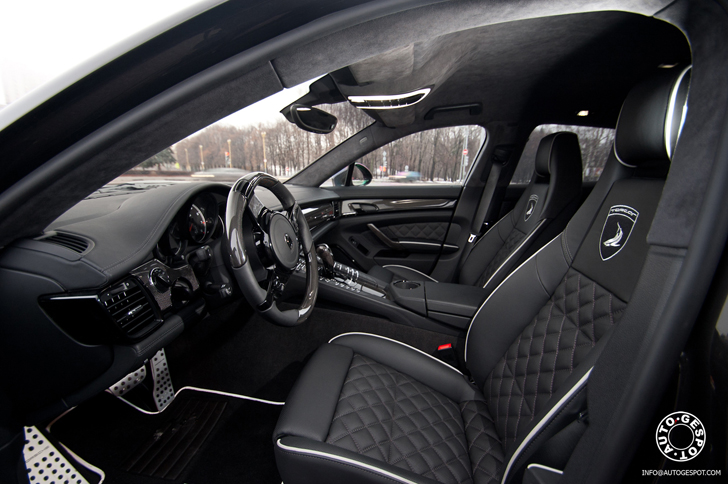 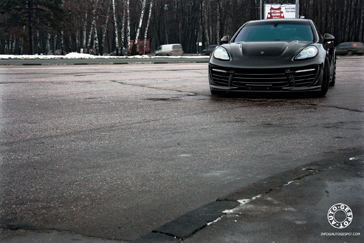 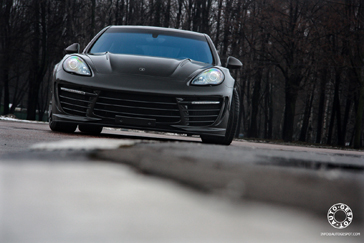 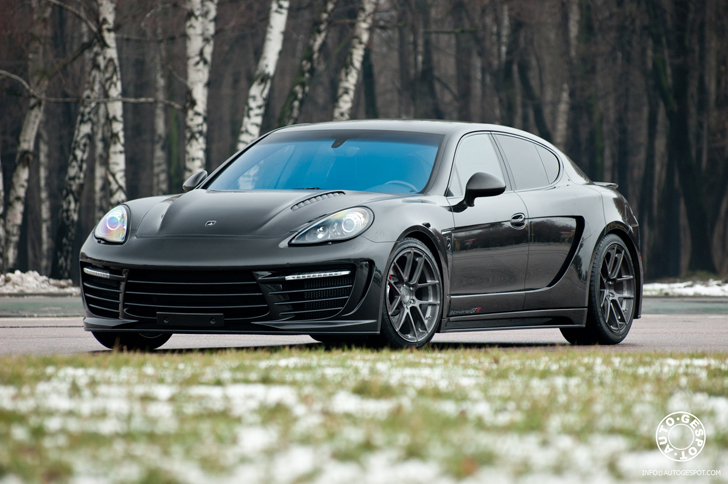 The possibilities when compiling the Stingray GTR are endless. Only 25 copies will be made so extra attention will be given to this car. The most remarkable example to show the possibilities of compiling a Stingray GTR is a black copy with some extra costs of €150.000. This copy has gold, white crocodile leather and expensive Karelian birch wood placed in the car. This wood is a type which you can only find in Finland and Russia. It is a white wood with brown spots in it. There are also a blue and with copy of this Stingray GTR delivered. The copy in our report has a carbon fiber interior with black leather and grey stitching, relatively simple. The car has a 550 bhp V8 engine, it is a Panamera Turbo S. The price of the car is a massive $430.000 which will be €330.000 in Euros. You will wonder who is actually so crazy to spend that much money on a Porsche Panamera. In most of Europe there is really no market for a car like the Stingray GTR yet. The car is quite impressive in photographs but in reality it is even more impressive. This is a car which you will buy to make a statement and show other people who you are. You’re driving a Stingray GTR to show that you are successful and don’t care how other people think about you. If the devil would live on this world, he would drive a Gembella Mirage GT in the weekend and grab his TopCar Stingray GTR on the weekdays. With the looks of the car in combination with its name, it is well worth it! 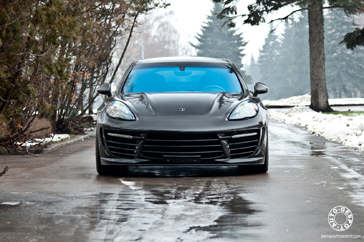 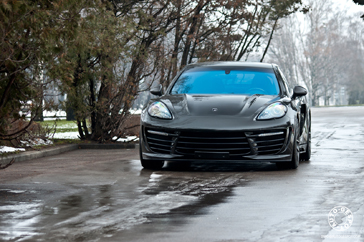 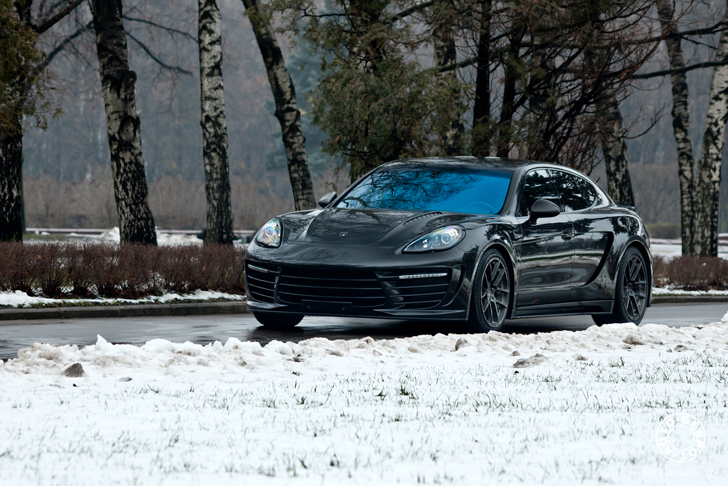 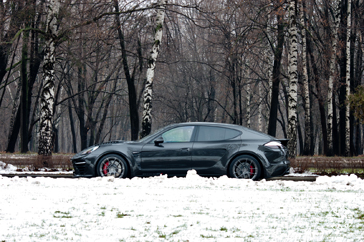